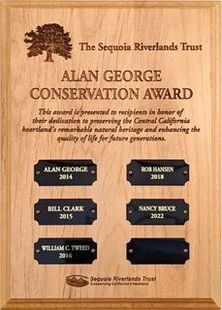 The Sequoia Riverlands Trust Alan George Conservation Award recognizes and celebrates extraordinary achievement in conservation in the local community. Given annually, the award is meant to recognize and encourage the spirit of conservation in Tulare County. The award is open to local leaders, landowners, educators, and members of the general public, with the hope of building bridges between environmental organizations, educational institutions, agriculture, and government to help advance our mission of conserving the lands and waters at the heart of California.

The award is named for Alan George, who was a leader in both the agricultural and conservation sectors of Tulare County, and was instrumental in the creation of Sequoia Riverlands Trust and Kaweah Oaks Preserve. 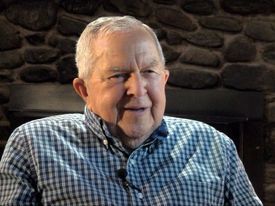 Alan George during an Interview with Greg and Laurie Schwaller

Alan George (1924 - 2019) was a leader in his community in many ways. Born and raised in Visalia, he served his country by joining and fighting in the US Navy during WWII, for which he received a Purple Heart medal. After the Navy, he attended and graduated from UC Berkeley. For 34 years, he worked with the UC Cooperative Extension in Tulare County as a cotton farm advisor. During his career, he made many great contributions to the agricultural industry in the region, especially in the cotton business. He was also very involved in his local community, volunteering his time to better Visalia and serve as a leader in various capacities. He was the President of the Tulare County Historical Society, the Tulare County Grand Jury, the Beautification Committee for the City of Visalia, Committee for the Restoration of the Fox Theater, helped create the Ralph Moore Rose Garden, and volunteered to maintain and enhance local parks.

In addition to all of this work, Alan was also instrumental in protecting the area that eventually became Kaweah Oaks Preserve. From a young age, he had always been interested in trees, especially the Valley Oak. He had a great appreciation for the Valley Oak forest of the “Swamp,” as it was called by locals, which was a remnant of the valley oak forests that extended from the Sierra Nevada to the now drained Tulare Lake. As an adult working as a farm advisor, he worked with Myrtle Franklin, the owner of the property at the time, to help her develop a farming strategy for the land and nudged her towards selling the land for conservation. He then connected Myrtle to the Nature Conservancy, and worked with both to create a mutually beneficial deal to protect the land. He then organized a fundraiser within Tulare and Kings Counties, raising over $100,000 of community donations to support the purchase of the land by the Nature Conservancy in 1983. He was also instrumental in establishing the Four Creeks Land Trust, which took on the Preserve from the Nature Conservancy, and in the creation of Sequoia Riverlands Trust as it is today.

Alan’s contributions to the natural and agricultural legacies of Tulare County, especially the protection of our very special Kaweah Oaks Preserve, earned him the title of “Mr. Oak.” His love for nature and conservation, his leadership in the community, and his importance in our area’s history make him the perfect namesake for our annual conservation award dedicated to others like him.

Alan was the first recipient of the Alan George Conservation Award in 2014. 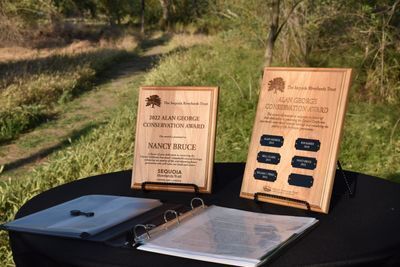 SRT Alan George Conservation Award (AGCA) candidates and honorees should reflect as many of the following criteria as possible: