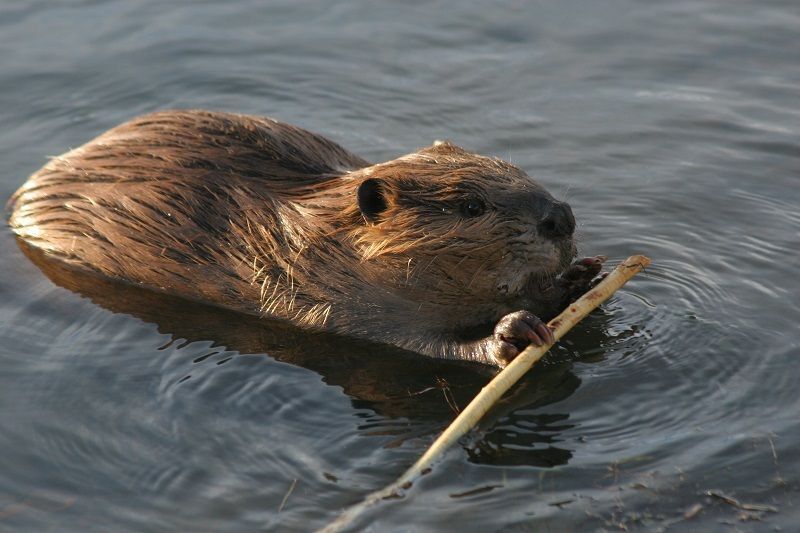 (SPRINGVILLE, CA) – SRT’s Sopac McCarthy Mulholland Blue Oak Ranch is home to a diverse range of native and migratory species. It is also becoming an outdoor lab for species reintroduction, in some cases with an eye to their assistance in meeting land management objectives.

Threatened western pond turtles have been relocated to the Springville area preserve’s picturesque pond at the heart of the property. On a typical day, the reptiles can be seen sunning on a large rock at the pond’s north end.

Nearby, the future may be looking brighter for beavers. Experimentation with SRT’s first Beaver Dam Analog (BDA) is slated to begin near the Blue Oak pond in early 2023. Groundwater recharge, wildfire avoidance, and other habitat modifications are just a few benefits beavers are expected to bring to the table­––the water table, that is.

“The idea of the Beaver Dam Analog is to help the incised channel of Harris Creek to build up sediment and allow water to access the surrounding meadow, wetting the soil in what is currently dry landscape,” said Ben Munger, SRT Director of Mitigation and Land Management. This restoration project is located on Harris Creek where it passes through the preserve at the edge of a large meadow. At some time in the past, the drainage cut into the bottom of the meadow leaving about a six-foot deep channel, Munger said, so the idea is to collaborate with nature and what it is already doing in the vicinity.

The BDA structure is to be built within the incised channel. It can also be called a post-assisted log structure (BDA or PAL). “We probably will use some techniques of both types of structures to slow the water, deposit sediment, and wet the base of the meadow that at one time was moist, based on the presence of seges there. There may be room in the preserve’s section of Harris Creek for two or three of these small in-stream structures,” Munger said.

Rather than form-based beaver reintroduction that involves significant terraforming and other interventions, an alternative approach is preferred, with an element of experimentation and adaptive management called Process Based Restoration. “Over several wet seasons SRT will be able to test our methods and watch what happens when we slow the water down and deposit sediment in the main channel,” Munger said, adding that Harris Creek is very small and so will be a good place to learn some of these techniques. “It is important to remember that even though we are not introducing beavers into Harris Creek, we are trying to shift the small riparian area into mesic habitat that maybe could support beavers, hence we use words like Beaver Dam Analog to describe what we are attempting to do from a restoration perspective.”

SRT is being assisted by the USFWS at Kern National Wildlife Refuge and was granted habitat restoration money from the Partners Grant from the USFWS. For now the work will be confined to the small stretch of Harris Creek, and possibly at the preserve eastern upper elevation at Sycamore Creek in a much smaller location. At this point SRT has no plans to expand the use of BDAs or PALs in other on SRT lands. As Munger sees it, “We hope that other landowners can see the benefits of healing incised channels and allowing water to remain in the surrounding landscape, especially to help wildlife habitat, and raise groundwater levels.”

SRT Education staff continues its collaboration at Blue Oak Ranch with the Foundation for the Application of Science (FAS) and Pleasant View School District. That team is managing the preserve’s western pond turtle research project.

SRT recently hosted a field trip to the preserve for the entire class at Pleasant View Elementary in Poplar, at which students learned about the preserve’s history and natural ecosystems. They scouted likely sites for the western pond turtle monitoring system that will soon be installed.

Later, select students from Pleasant View Elementary and Monache High School visited Blue Oak Ranch to assemble and install a receiver station which will collect signals from monitoring devices attached to individual turtles, then relay this information to satellites for remote monitoring.

The students learn about more than just native species, however. Technology is also part of their efforts with circuit boards, GPS monitoring, and building the receiver station in their classroom. “We are hoping that by the end of the year, the students will have created the monitoring devices, and we can host another trip to the preserve to test their efficacy and fix any issues that arise,” said Sneha Kumar, SRT Education and Outreach Associate.

“By Spring, we would like to begin a catch-and-release program to collect baseline data about the turtle population at Blue Oak Ranch Preserve and install the receivers on the turtles. We could not have done this project without the generous support of Land o' Lakes, FAS, and the Schwemm Family Foundation,” Kumar added.