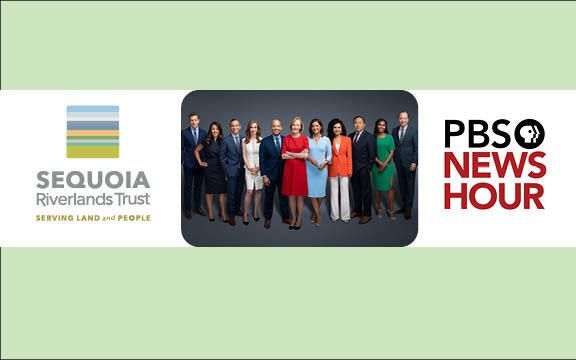 For the first time in its 20+year history, SRT has raised its media profile through presence on Valley Public Television.

SRT recently began ongoing sponsorship of PBS Newshour, winner of numerous Emmy and Peabody Awards for journalistic excellence. NewsHour is anchored by managing editor Judy Woodruff and features the latest news, analysis, field reports from around the world, live studio interviews and discussions. For almost 50 years, millions have turned to Newshour as public broadcasting’s marquee nightly news program for the solid, reliable reporting that has made it the most objective news program on television.

"The goal was to raise awareness of SRT's mission and brand, as well as to underscore our continuity amid a shifting and very challenging climate," said Aaron Collins, SRT Director of Marketing and Communication. "SRT, now in it third decade, makes long-term commitments with farmers and ranchers, as well as through area groundwater and land repurposing efforts. So our alliance is a good fit with such a longstanding program as PBS Newshour and reflects our long-term stake in the health of our lands and waters here in California's heartland."

The 30-second spot appears weeknights on the 6 p.m. broadcast, and was produced by SRT in conjunction with Valley PBS. Many viewers will instantly recognize the notable voice talent of KVPR radio veteran Marv Allen, whose distinctive and memorable voice has long been highly sought in San Joaquin Valley advertising and broadcast circles and beyond. "I first worked with Marv on clients' ad campaigns more than 35 years ago, so I was thrilled to have the opportunity to do so once again and have Marv's distinguished talent and resonant sound become the voice of SRT."

SRT's message is being beamed from Merced to Kern Counties. Alen's work for SRT can also be heard on its campaign running concurrently on KVPR's Morning Edition.