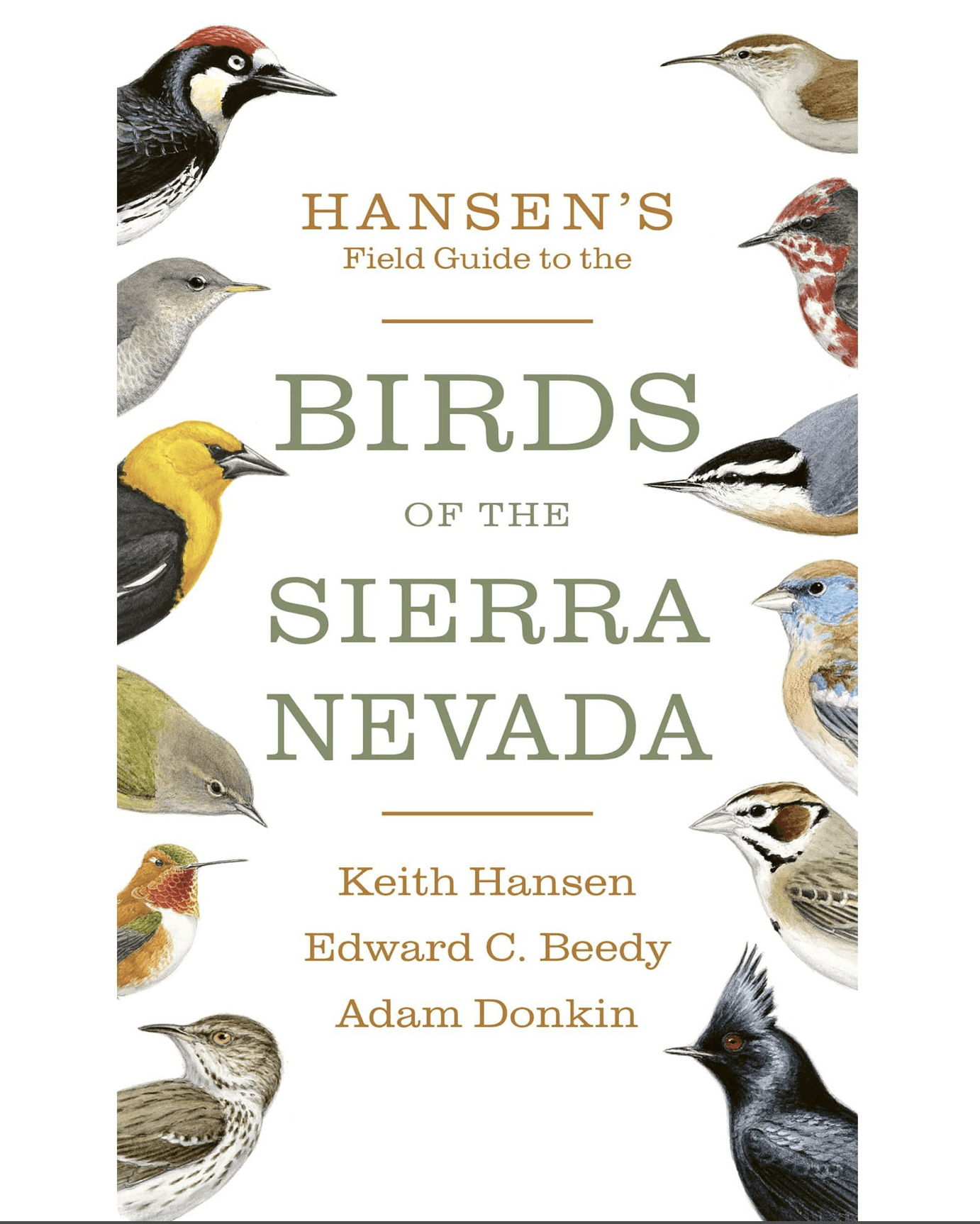 If you haven’t already, please familiarize yourself with the mind-bogglingly great treasure trove of nature- and conservation-related titles published by Berkeley, California-based Heyday Books. While many of the books are Bay Area-centric, a good number of them highlight the fascinating biodiversity of the Sierra Nevada and locales closer to home here in California’s heartland.

SRT’s network of friends and colleagues feature well at Heyday. Illustrator Keith Hansen (brother of Rob Hansen, SRT Board Member Emeritus and 2018 SRT Alan George Conservation Award winner) has a book out entitled Hansen’s Field Guide to the Birds of the Sierra Nevada, (Heyday Books, 2021). This beautifully illustrated reference showcases Keith’s sixteen-year project to illustrate the birds of the Sierra Nevada. Paired with stunningly detailed portraits is text by zoologist and prior co-author Edward C. Beedy, PhD––whose work is informed by his decades of birding experience—crafts prose that while firmly grounded in expertise will nonetheless delight readers with whimsy, allusion, and affection. Keith and Rob are brothers to another SRT friend and talented Hansen sibling, Doug, whose familiar interpretive illustrations welcome visitors to Kaweah Oaks Preserve and tell of the land’s history at the preserve’s entrance kiosk.

Another friend of SRT, William C. Tweed (former SRT board member and longtime Chief Naturalist for Sequoia and Kings National Parks), couldn’t have been better situated to write the book on the world’s largest tree, Sequoiadendron giganteum. The large title befits its subject: King Sequoia: The Tree That Inspired a Nation, Created Our National Park System, and Changed the Way We Think about Nature (Heyday Books; 2017). Bill’s volume was a finalist for the 2017 NCIBA Book of the Year Award.

King Sequoia is the work of one of California’s preeminent naturalists, a gifted communicator who unspools a history that echoes across generations and continents. Bill takes readers on a tour of the big trees in a narrative that travels deep into the Sierras, around the West, and all the way to New Zealand. He explores the American public’s evolving relationship with sequoias, whose groves in Yosemite and Calaveras were early tourist destinations to witness a species that predated Christ and loomed over all the world’s other trees as the embodiment of California’s superlative, almost unbelievable appeal. Featuring an entrancing cast of adventurers, researchers, politicians, and environmentalists, King Sequoia reveals how one tree species has transformed Americans’ connection to the natural world.

When sequoias were threatened by logging interests, the feelings of horror that this desecration evoked in people catalyzed protection efforts; in a very direct way, this species inspired the Park Idea. And sequoias’ influence doesn’t end there: as science evolved to consider landscapes more holistically, sequoias were once again at the heart of this attitudinal shift.

With the threat of wildfire evolving and raising questions about long-term viability of California’s diverse ecosystems, look to Heyday for new fire-related books such as Cold Canyon Fire Journals: Green Shoots and Silver Linings in the Ashes, by Robin Lee Carlson (Heyday Books, 2022). This book explores the effects of fire when the preserve at Cold Canyon went up in flames—a casualty of California’s raging fire seasons—and Carson embarked on a five-year journey to learn the legacy of the burn. Spurred by scientific curiosity, her deep exploration of this fire-swept ecosystem unearths view-altering revelations about nature’s wild wisdom with her transformative story of fire as a force for renewal. The book underscores what scientists are urgently working to understand: that in some cases wildfire functions as an elemental power that does not destroy the diverse habitats of California but rather nourishes them, although climate change is rewriting that equation. Richly illustrated in pen, ink, and watercolor, this snapshot of wildlife emerging from the ashes reveals the cyclical wonder of our wild places. Carlson’s artistic and scientific journey ultimately leads her (and us) to a new understanding of how we must live in relationship to the land. With fire suppression and climate change undermining the regenerative work of wildfire, Carlson’s story of ecological kinship is an urgent one that shows us how cultivating intimacy with our natural world can teach us to sustain it.

When wandering over to heydaybooks.com the curious will want a big cup of tea and plenty of time to explore numerous other titles of relevance to the conservation mission, including John Muir’s ethos and history in California, native species and habitats, and all manner of nature-related titles in addition to the humanities, arts and culture, and native peoples among other numerous sections of this treasured library of all things California. A lifetime of reading awaits, if only the years permit.