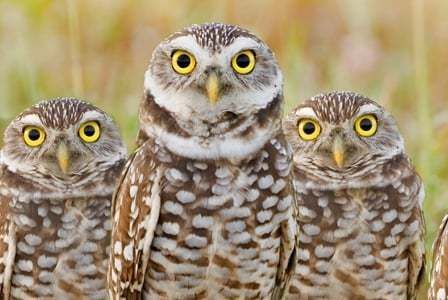 These Californians can relate to a bad housing crisis. The burrowing owls of California, that is, who have found their natural habitat dwindling over the decades.

To address the problem, SRT recently installed artificial burrows for burrowing owls in the Antelope Valley as part of a solar mitigation project. "This was difficult, but rewarding work and good practice for burrowing owl habitat improvements related to SGMA," said Ben Munger, SRT Director of Mitigation and Land Management.

The project began in 2020 with SRT Conservation Biologists Camdilla Wirth and Ian Axom surveying the area. The property is part of a Clearway Energy mitigation site for burrowing owls with an established population one quarter of a mile away on another mitigation property. SRT staff felt it was an opportunity to gain experience and build the artificial burrows drawing from the User's Guide to Installation of Artificial Burrows for Burrowing Owls (David H. Johnson, Donald C. Gillis, Michael A. Gregg, James L. Rebholz, Jeffrey L. Lincer, and James R. Belthoff; 19 August 2010).

All of the materials used to construct the artificial burrows are easily accessible, except for the blue plastic 55 gallon drums. SRT enlisted Board Member Scott Spear to obtain the barrels, which he sourced through ag industry contacts. To create the homes, the barrels were cut in half, with tops created from 2.5 gallon plastic buckets with the bottoms cut out. A second 2.5 gallon bucket was added to form the lid which, although buried, can be removed to check on the burrowing owl nest.