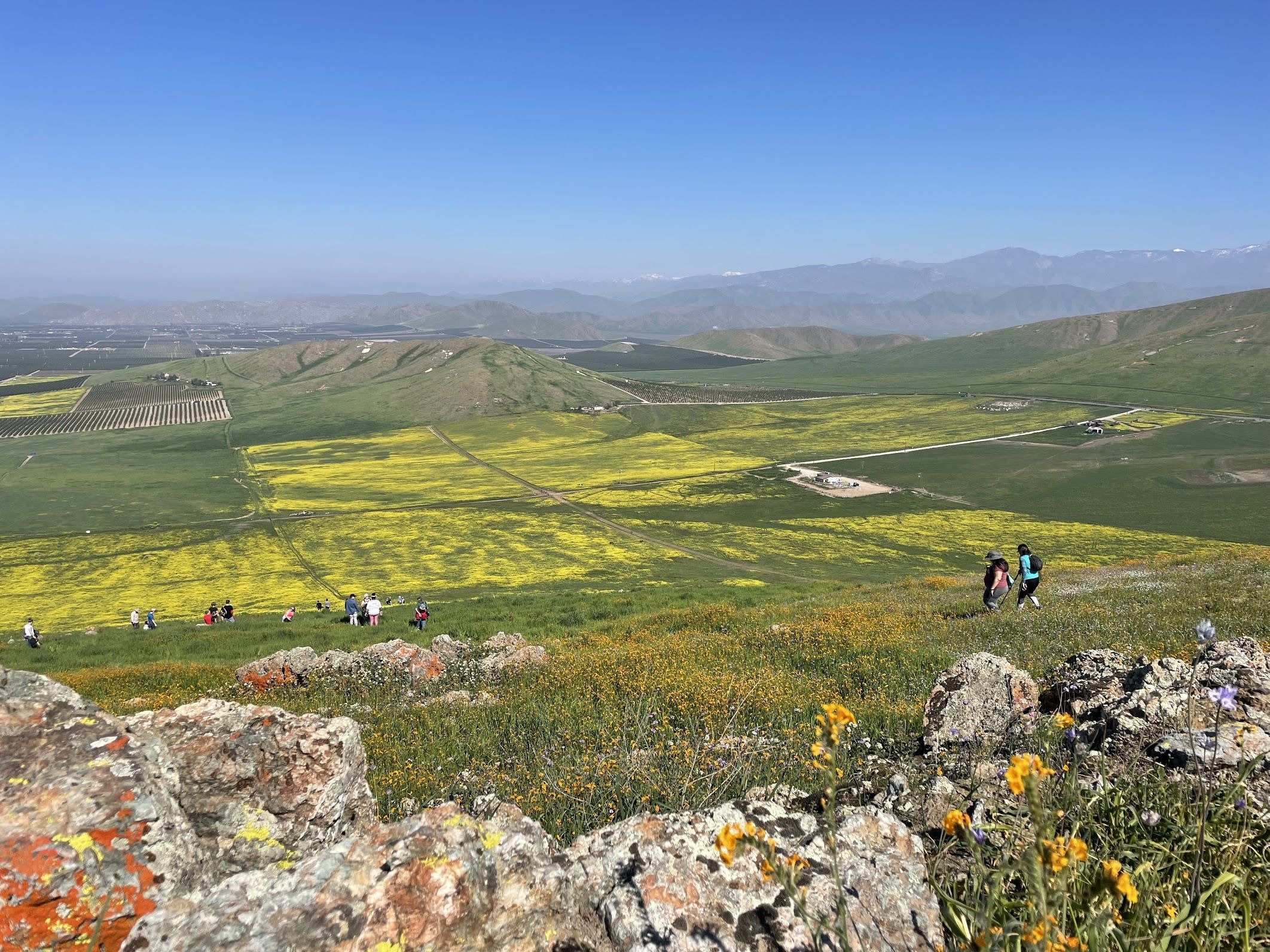 (PORTERVILLE, CA) - Dotted by cattle and small farms, the land around SRT’s Lewis Hill Preserve near Porterville rises to offer amazing views and something even more rare: Unusual wildflowers found only in our two-county area--and the only location where these rare beauties are protected.

On February 19, hundreds of native plant enthusiasts from around the region gathered to view the striped adobe lily (Fritillaria striata), which blooms in mid February. Later spring finds the San Joaquin adobe sunburst (Pseudobahia peirsonii) bursting out around the same preserve.

Both species are found nowhere outside of a few locations along the southeastern edge of the Tulare basin and inhabit heavy clay because it holds onto water longer in the season. At Lewis Hill and a few other places, the soil also contains minerals such as serpentine (the official California state rock) with high levels of magnesium and low calcium that other plants can’t tolerate—hence, the preserve has no oaks. Areas with these soils are scarce in our area which is partially responsible for the plants’ rarity.

Other factors for their rarity include conversion of land to agriculture or residential development, competition from invasive annual grasses, and overgrazing. However, light to moderate grazing likely benefits both plants, and at Lewis Hill, grazing is timed to reduce the annual grasses that compete with them for water, sunlight, and nutrients.

The San Joaquin adobe sunburst is an herb in the sunflower family that grows to 4" to 18” tall, is covered with white, wooly hairs, has pinnately compound leaves, and produces yellow-orange blooms very similar to the more common goldfields (Lasthenia spp.) in late March into April. It is difficult to distinguish from the common foothill sunburst (Pseudobahia heermanni) and requires inspection of the phyllaries, or subfloral bracts, to tell them apart. (If the botanical jargon is making your eyes glaze over, chances are if you see a sunburst it’s the foothill version, since one is common and the other endangered--unless you’re at Lewis Hill, of course).

Unlike the striped adobe lily, the sunburst has an annual life cycle that ends after it produces seeds in the spring. If conditions aren’t favorable in a given year because of precipitation or other factors, seedlings may be outcompeted by annual grass and die, or they may not germinate at all.

The striped adobe lily is a perennial bulb in the lily family that produces short, simple leaves that are 2-4” long and has flower stalks up to 15” tall with as many as 7 pleasantly aromatic, bell-shaped flowers per stalk. For its first few years of life, the plant produces one to a few leaves but no flowers until it is mature. The striped adobe lily can live 20 to 30 years, dwarfing the sunburst’s lifespan of only a few months. The lily blooms fairly early in the season, typically from February to early March. After the flowers mature into fruit and produce seeds, the plant dies back to the ground in the summer and lies dormant until the rainy season arrives again. Although the number of flowers produced varies from year to year, the number of individual plants is relatively consistent as the plant can store energy in its underground bulb, which helps it survive through poor years.

In addition to these two plants, Lewis Hill is home to many native wildflowers, and in a favorable year the upper parts are covered with a kaleidoscope of colors from fiddleneck, glassy onion, popcorn flower, California poppy, caterpillar phacelia, white fiesta flower, and more. A lucky visitor may see a bald eagle, borrowing owl, osprey, rattlesnake, or badger.

The numerous and rare plants, the animals, and the land they live on are protected thanks to the generosity of Cole and Priscilla Hawkins, who stewarded the land, recognized it for its natural resources, and donated the property for perpetual conservation in 1994.