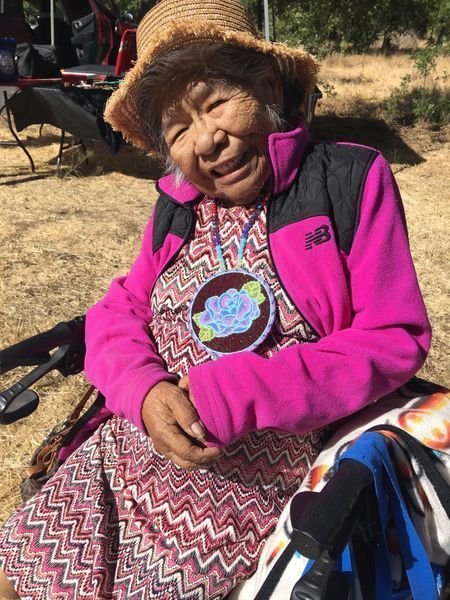 No blessing is so poignant and urgent as one uttered by the last living speaker of a vanishing language. That truth was evident in 2014 when Marie Wilcox spoke her blessing in Wukchumni at a ceremony for SRT Kaweah Oaks Preserve's newly-added acreage. That day she summoned an authority and knowledge derived from thousands of years of her Yokuts ancestors who have called Central California home, consecrating the land and thanking the Great Creator for its many gifts and protection for the land.

Marie's words were understood only somewhat by her family in attendance, and no others. But they revealed a great deal nonetheless about Marie herself: Her love of the land; her openness to engage with the broader culture that had historically been far less open to hers; her nine decades of coming to terms with her tribe's history on the land. It was an unforgettable ceremony, bittersweet and fitting that her family and community members gathered at Kaweah Oaks to memorialize her and celebrate her life in early October.

Marie Desma Wilcox of Visalia died unexpectedly on September 25. Her passing was heralded by media from the venerable New York Times to the local Visalia Times-Delta. Credited with saving her language by the creation of a dictionary 20 years in the making, Marie's life work was celebrated in an excellent 2014 New York Times Op-Doc, Marie's Dictionary,  that highlighted her rescue of her beloved Wukchumni language. But while much about her life could be summed up by the dictionary's publication, her purpose was much greater than just that.

The matriarch of a well-known local Native American family with extensive tribal ties throughout the region and beyond, Marie raised a daughter, Jennifer Malone, who created Go Native: A Celebration of Native American Culture that is held at Kaweah Oaks Preserve each May. She fostered a family that has begun to study the remnants of their language, who have learned the traditional Native ways and crafts and medicine plants and other cultural traditions.

Her legacy and life work will live on thanks to her efforts, a gift she created and has left for thousands of Native and non-native generations ahead.

Please join us in celebrating and remembering Marie Wilcox. Her spirit and love of the land remain everywhere around, though we will greatly miss the person who was once in our midst.