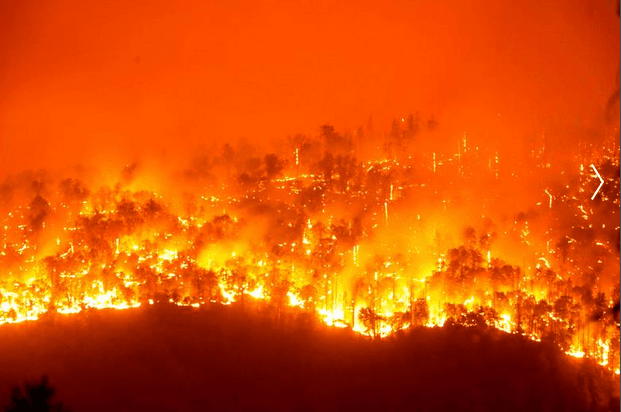 (California Hot Springs, CA) - With a number of SRT easement properties nestled in the Sierra foothills, wildfire has been an annual and ever-present danger to our conservation lands. While conifer forests at higher elevations have borne the majority of recent fire impacts such as the SQF Complex and KNP Complex fires, lower woodland zones have faced threats as well.

In early October the Windy Fire made a significant push to the south along the Greenhorn Mountains in the Giant Sequoia National Monument and west into the Tule River Indian Reservation. The nearby Buckeye Ranch, owned by Jim and Gay Versteeg, and one of Sequoia Riverlands Trust’s important conservation easements in southern Tulare County was not burned, however the fire came close. Other area properties were lost as the fire pushed into the mountain communities of Sugarloaf above California Hot Springs and Pine Flat. Significant loss of Giant Sequoia trees have been reported as well.

Because of the irrigated pastures and grazed blue oak woodland at the Buckeye Ranch, Cal Fire officials felt confident that the Versteegs need not evacuate.  The couple knew the area well and were able to help the Cal Fire dozer team to scout and build fireline to prevent fire from progressing any further west into the Tyler Creek area.

After the Windy Fire’s big early October push, the fire weather moderated and all of the fireline created by the dozers was rehabilitated and roads used by the dozers were improved to prevent any erosion from water flow in the winter.

As of mid-October the Windy Fire was 88% contained and cooler weather with some precipitation predicted.

SRT is grateful for Cal Fire's expert response and the Versteeg's willingness to pitch in an help protect these important lands.