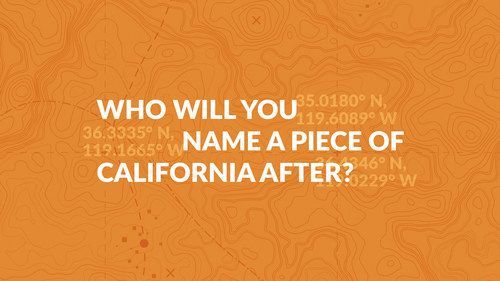 The result is the newly-launched “Rename CA” energy conservation initiative that rolled out statewide earlier this week.

“SRT is grateful for the uncommon opportunity to work with Doyle Dane Bernbach. Their worldwide reputation, creative excellence, and long history make them legendary survivors in an advertising world that precedes the Mad Men era” said Aaron Collins, SRT Director of Marketing and Communications, who negotiated the deal on SRT’s behalf along with Scott Spear, SRT Interim Executive Director. ”Everyone knows DDB's ad work, if not their highly-regarded name in the ad agency world.” The agency was established in 1949.

According to Spear, “The Rename CA campaign is bringing statewide awareness that is very helpful to SRT’s important mission, raising our conservation organization’s profile considerably throughout California while highlighting our parallel efforts to conserve resources during what is a pretty trying time for California,” he said.

Rename CA is an incentive program that will award three lucky conservation-minded winners the naming rights for a feature at various SRT locations including Kaweah Oaks Preserve near Exeter, Dry Creek Preserve near Three Rivers, and SRT’s wildflower grasslands in the Carrizo Plain, noted for its super blooms. The three prizes are awarded among those who opt into EUC’s Goldie energy conservation app.

In addition to the statewide exposure for SRT, whose mission is to inspire love and lasting protection for important lands, the deal will bring important financial resources to help offset the nonprofit's costs of managing 40,000-plus acres of nature preserves and other conservation lands and programming under SRT ownership and/or management.

As unusual as the DDB project may be locally, this isn’t the first time SRT has received a call from high-profile would-be collaborators. In 2019, Collins worked with PBS Nature, the long-running natural sciences TV program produced by WNET in New York. SRT and ValleyPBS created “Nature’s Keepers” in conjunction with Nature’s American Spring Live, a three-night broadcast which WNET aired live throughout the U.S.