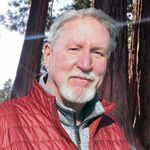 In addition to all of his conservation and education work in the National Parks, Bill Tweed also had a great impact on Sequoia Riverlands Trust. He has served on our Advisory Board for many years, and continues to share his knowledge and wisdom with us and other non-profit organizations on whose Boards of Directors he serves. His dedication to the natural world and his impact on local conservation efforts made him one of the top candidates for the Alan George Conservation Award, which he was awarded in 2016.

Bill currently lives with his wife in Bend, Oregon.