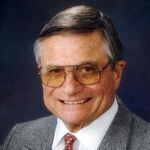 Hanford native Bill Cark (1930-2015) was a leader in conservation and historical preservation in the local community. After graduating high school, Clark served his country in the Navy for five years, during which he visited and fell in love with Japan and Japanese culture. Upon returning to the United States, he worked as a farmer, dairyman, and business owner for many years. He and his wife Elizabeth also founded The Clark Center for Japanese Art and Culture in Hanford, which they ran for over 20 years until it closed down in 2015. During its operation, the Center held one of the largest private collections of Japanese art in the nation.

Bill and Elizabeth also worked with Sequoia Riverlands Trust to place an easement on their dairy and ranch - the Howe Ranch - to protect it from future development and to keep it in agriculture. The ranch surrounds the Clark Center, and is the first property in Kings County to have an easement placed on it. Another one of their properties was donated to Sequoia Riverlands Trust by their son Stuart Clark, and is now protected permanently as the Bill and Libby Clark Ranch Preserve - SRT’s seventh nature preserve, and the first in Kings County.